Kamala Devi
is an author, Tantra Teacher and Bliss Coach. This blog is a playful space for her to expose the un-official details of her juicy life! Please, let me know your thoughts!

Check out My Sites

And the Golden Lingam Award goes to... 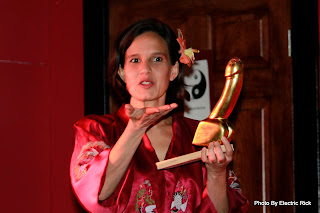 During each show, there is at least one player who shows up big. I mean really, really big. Someone who is pregnant with ideas, time and energy to contribute to the ensemble and the entire production. This is someone who is unconditionally supportive of everyone else, who handles their own work load and goes way beyond the call of duty to make the show a shimmering success. In many teams, drama classes, or theater troupes this person would be considered the most valuable player. And in the big leagues of acting their quality may even be recognized with a prestigious academy award. In Tantra Theater however, MVP stands for Most Vulnerable Player and we recognize them with the perpetual Golden Lingam Award. In Spring of 09 it was gifted to Janos Novak for building props and getting naked onstage, In Winter of 09 it went to Sara Murray Novak for painting backdrops and now, in Spring of 2010 it goes to...Michael McClure AKA Eco-Elf. 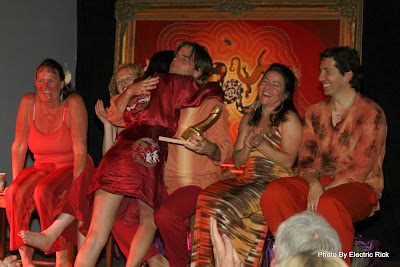 I know, I know, he's my husband. And as the director of Tantra Theater, I was reluctant to bestow this high honor on someone that I'm sleeping with. I didn't want to cause mutiny amongst the cast, but I'm sure they would all agree that he has produced more new material than everyone else put together. As a budding environmental comedian, he created over 15 minutes for the April show, another 20 minutes for earth day and a brand new 5 minute piece for the Shamanic Storytelling showcase. Not to mention, he rigged the lights, loaded and unloaded the entire set into his truck, and was the patron saint in funding the April show. Thank you Michael. We love you. And your toxic comedy makes us LOL!
P.S. Can I borrow that award when your not using it?
www.BlissCoach.com Kamala Devi